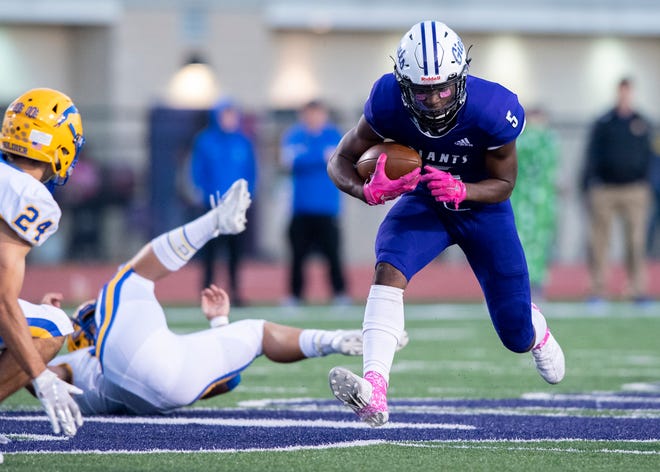 Recap: 2019 was a tale of two seasons for Ben Davis. Coming off the Giants’ worst season since 1985, Ben Davis stumbled out of the gates with a 1-3 record with losses to Brownsburg, Avon and Center Grove.

The turning point of the season came in the Circle City showdown against Warren Central. Ben Davis finally had luck on their side thanks to individual efforts by Daylan Carnell quarterback Trent Gipson and kicker Zach Fox.

Having won three of their last four games and a share of the MIC title, Ben Davis continued the run in postseason play. The Giants went on to knock out Perry Meridian, Southport and Zionsville en route to the team’s first semi-state appearance since 2017. Alas, the team’s resurgence came to an end at Center Grove, 17-10.

Trent Gipson (QB): Gipson was a solid signal caller in his two years as the starting quarterback. Despite some shortcomings in the passing game, Gipson was dangerous as a scrambler. The two-year starter finished with 940 rushing yards and 11 touchdowns on the ground in his final season.

Alijawon Hassel (RB): Hassel was one of the best tailbacks in the conference last season, earning a place on the All-MIC first team. The tailback left defenders in the dust, rushing for 1,282 yards – the 11th highest single-season total in program history – and 15 touchdowns.

Capone Powell (DB): Powell was one of the most versatile defenders for Ben Davis last season. The senior finished with the second-most tackles (74), 4.5 tackles-for-loss, two interceptions and a sack.

Daylen Carnell (WR/DB): Carnell enters the 2020 season as one of the top players in the state. Despite having the distinction as a two-way player, Carnell does most of his damage as a corner. Carnell led the team in pass breakups (6) and interceptions (5) last season. He has already committed to play defensive back at Missouri.

Charles Knuckols (DB): Knuckols has a nose for the football. The starting safety led the team in tackles last season (122) and even notched a sack. Knuckols, along with Carnell, make up one of the best secondary groups in the MIC.

Keoke Toomer (LB): It was a trial by fire for the sophomore linebacker last season. Despite being thrust in the starting lineup early in the season, Toomer performed quite well during stretches of play. Toomer finished with 55 tackles, including 10 tackles-for-loss, and two sacks. Toomer’s stock will continue to rise in the coming seasons.

One matchup to watch: 9/18 at Warren Central – Ben Davis has not won on their crosstown rival’s turf since 2012. Will the drought end this year? On paper, this matchup looks even when Warren Central and Ben Davis square off in the 96th edition of the Circle City showdown.