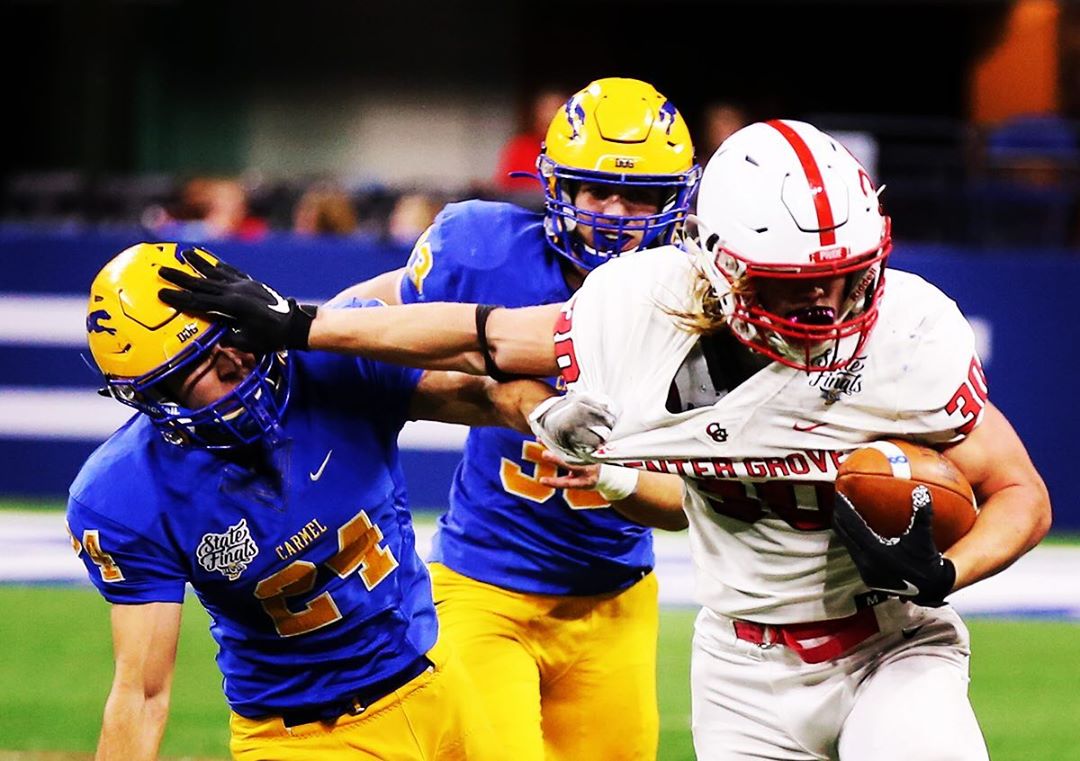 A big reason for the team’s struggles was due to youth and the absence of long-time starter Carson Steele. After two years of being the bell cow for the Trojans, Steele was sidelined with a foot injury that kept him out until the postseason. Stepping in for Steele were Daniel Weems, Connor Delp and Brandon Wheat, who all performed well despite some fumbling issues. Center Grove picked up steam in the second half of the regular season, winning three straight after starting with a 1-4 record.

Steele returned just in time for Center Grove’s Regional matchup at Warren Central. A year after being denied at the goal line in the semi-state, Center Grove avenged the heartbreaking loss from last year’s Semi-State and eventually advanced to the state title game for the first time since 2016.

In the state title game, Center Grove committed too many miscues against a Carmel team that capitalized on those mistakes. Starting quarterback Tayven Jackson made things interesting late in the game thanks to some individual heroics, but the Trojans ultimately fell short, losing 20-17.

Center Grove will enter the season as an early favorite to win the Class 6A state title. The Trojans return 14 starters from last year’s state-runner up team, including Steele, Jackson and two of the best defensive ends in the state. As long as there is a football season, Center Grove has the talent to finish the season as a state champion.

Ethan Crowe (OL): Crowe is one of four starting offensive linemen that graduated this past Spring. The starting center anchored an offensive line that dominated at the line of scrimmage last season. If there’s one weak spot for the 2020 edition of the Trojans, it may be an inexperienced offensive line.

LJ Weems (DL): The Trojans lined up game wreckers along the defensive line, including Weems. The graduate finished his final season with six sacks, including a crucial sack in the semi-state to help seal a win over Ben Davis. Weems will continue his football career at Indiana Wesleyan.

Max Baker (DB): Baker was the lone senior for an inexperienced secondary last season. The graduate finished third on the team in tackles (68), along with four pass breakups and an interception.

Carson Steele (RB): How much did Center Grove miss their “War Horse” last year? In the 11 games without Steele last season, the Trojans averaged 231.1 rushing yards. That was a slight dip from the 2018 season where the team averaged 266.6 yards per game – Steele accounted for 174.6 average yards on the ground that season. Steele will look to put his brief 2019 campaign in the rearview mirror and end his high school career with a bang.

Austin Booker (DE): This is only one half of the defensive line juggernaut for Center Grove. Booker finished second on the team in sacks (8) and tackles-for-loss (14). The rising senior has already committed to continue his football career at Minnesota.

Caden Curry (DE): Curry is widely considered among the best defensive linemen in the state, and he has not even reached his peak. The rising junior filled up the stat sheet in his sophomore season, leading the team in tackles (100), tackles-for-loss (26.5) and sacks (10.5). Curry already has offers from several power conference schools, including Oregon, Michigan, Alabama and Ohio State.

One matchup to watch: 9/4 vs Carmel – The annual Copper Kettle game will also be a rematch of last year’s 6A state title game. This matchup will also be the first true test for Center Grove now that their matchup against Warren Central has been canceled.