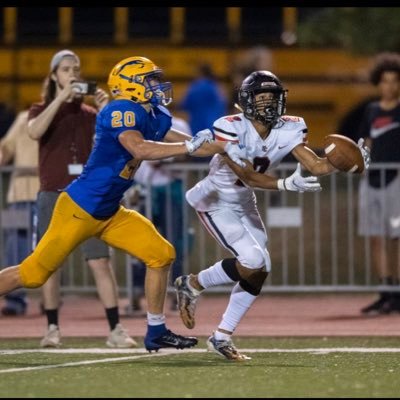 NOTE: As of July 13, the Washington Township school board, which supervises North Central, voted to postpone the reopening of schools for in-person learning. Included in the decision was the suspension of all on-campus athletic activities.

Recap: North Central backed up a strong 2018 season with an equally impressive 2019 campaign. One of the biggest wins in head coach Kevin O’Shea’s tenure came on the road against Carmel. North Central pulled off an impressive 27-21 win, spoiling Carmel’s homecoming night.

With a new cast of starters on offense, O’Shea relied on defense to carry the Panthers to a 6-3 regular season record, including a 5-2 record against conference opponents. North Central was rewarded with a share of the MIC regular season title – the program’s first conference title since the MIC was formed in 1996. North Central’s season came to an end against Warren Central for the second year in a row, losing 17-10 in the sectional semifinal.

Richard Hamilton (WR): Last year’s MIC Network Offensive Player of the Year winner was one of the most dominant receivers in the state. Hamilton hauled in 46 catches for 716 yards and 10 touchdowns in his senior season.

Grant Russell (DE): Russell wreaked havoc on the defensive line during his North Central career. In his senior season, the All-MIC defensive lineman finished third on the team in tackles (79) and first in sacks (8).

Jared Almeida (OL/DL): The two-way lineman was one of the top trench players in the MIC in his last two seasons. Almeida was named to the All-MIC team and the IFCA All-State team for his play last season. He will continue his football career at the University of St. Francis in Fort Wayne.

Theran Johnson (DB): For the last two seasons, Johnson has had success going against some of the best wide receivers in the state. He’s tallied six interceptions, along with 21 pass deflections. Johnson has already committed to continue his football career at Northwestern.

Thomas Bronaugh (LB): For the last two years, Bronaugh has anchored the North Central defense at middle linebacker. Bronaugh finished with 74 tackles, including a sack and an interception. The rising senior currently has offers from Division III schools Ohio Wesleyan and North Park University (IL).

David Smith (RB): Smith will need to produce in his senior season as he is one of the only returning starters on offense. The starting tailback averaged 3.9 yards per carry last season in a pass heavy offense.